I found myself the hapless prawn of fate today, suddenly making more soup than I ever have at one go before.

First, Hungarian cream of mushroom soup. Pretty much the same as any other c of m, but it had paprika. It's really good, so maybe the paprika was a good idea. Also I made a cornstarch and milk thickening, so the cream of part was particularly good. 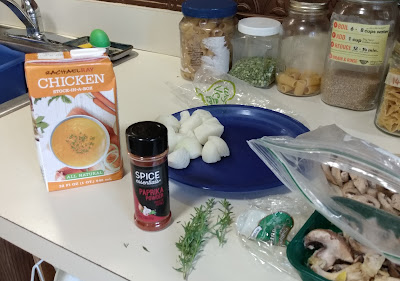 And garlic scapes are the usual garnish nowadays, still growing like mad. 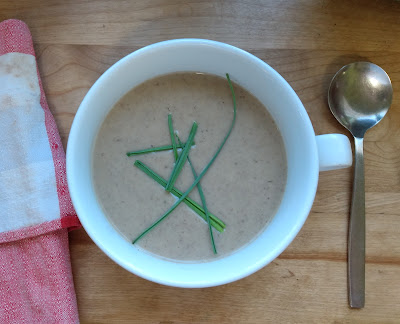 Then while I had all the tools out I thought why not make that leek and potato soup I've been talking about, before the potatoes get past it. I didn't get all posh and call it vichyssoise. This is more homey, doesn't talk furrin'. and it used all the potatoes and most of the overstock of leeks.

No pictures of the process, you've seen it before, but here's the upshot in the freezer 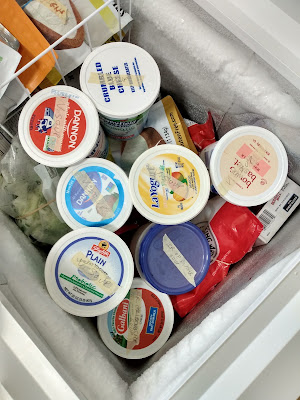 There's more under there. Ten helpings of mushroom and l and p. No need to make soup for a while.

My neighbor stopped in again today to continue the restaurant review of the plum jam which he says is perfectly balanced! I'll  never reach this peak again. Maybe I'll quit while I'm ahead. 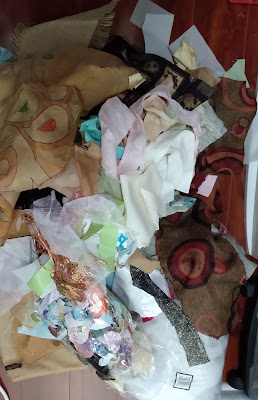 I also sorted a load of lovely silk and linen and velvet and organdy scraps for freecycling. Or the thriftie. There's also some batting in there.

I'm improving the shining hour. Or something. This activity was  accompanied by an audiobook of At Bertram's Hotel, a favorite Christie.

I wonder if this cooking and winnowing and reading and not making is related to my horoscope. It's humbling to think of all the planets organizing themselves in order to warn me against my friends, and to make soup.

It's so hot here that the idea of soup is not pleasing but I did make a gazpacho which is in the refrigerator. Salad you eat with a spoon, right? I do love a good potato and leek soup. Will you remind me next fall?

And fortunately leek and potato soup is excellent chilled. Out here we're heading for chilled fruit soups too.

Those planets, and those prawns of fate (especially the hapless ones)...!

That was my thought about chilled l and p. Then I'd go posh and call it vichyssoise.

Last time I had gazpacho was when I gave beautiful Jersey tomatoes I was growing, abd needed to unload them, on a friend. Who promptly made gazpacho and gave me a container of it. Which kinda defeated the purpose of unloading.

I have a hard time with the words 'chilled' and 'soup' in the same sentence. So, I just wait until days cool down.

I make potato leek soup every year but only in the winter. there used to be a little sandwich shop in the city that we would go to. not your ordinary sandwiches. they were gourmet, well, not really but different and good. and occasionally she would have strawberry soup in the summer. so good. then the land got bought for development and she closed the shop.

Just a note: we are having cool weather. Highest daytime in the 70s, night time in the 40s f. So soup is not as unlikely as it may seem to readers in hotter regions.

I love frozen meals, especially on a busy day when cooking feels like too much work.

Soup for every occasion.

I quite often don't feel like cooking, but I do feel like eating home cooking. The freezer is vital.