The coda on friendship: I did reference human friendship and everybody politely stayed within the frame of reference. But my friends include animals and plants.

Two of these converged yesterday when the five year old grandchild visiting next door came to show me her new friends, cicadas in a jar. Just caught for a while to see them up close.

She took one out to introduce me, and it gave a rattly squeak. I said he's talking to you. She: Yeah, when I pinch his butt he does that. Me: Do you think he's saying  ouch? She: Ohh. Maybe. Me: I like him. She: Yeah. Im putting him in the tree now. And off she went,  mission accomplished.

I doubt if I will live to experience another 17 year cicada season. So this was a great moment of friendship across race and species and age, all at once.

On to less weighty subjects.

More on the endless world of pockets, with another Pro Tip from Polly Pockets here. 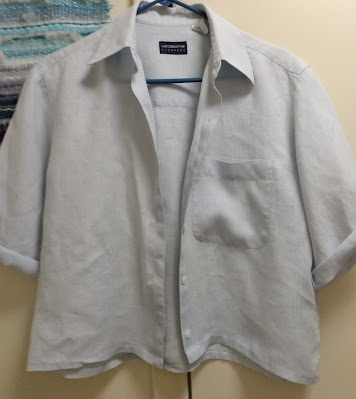 Here's another beloved linen shirt, altered to suit. Roll sleeves, cuffs long gone into some art or something, tail shortened to my liking. It already has a pocket but things can fall out if you bend to see stuff out walking. So it does need help. 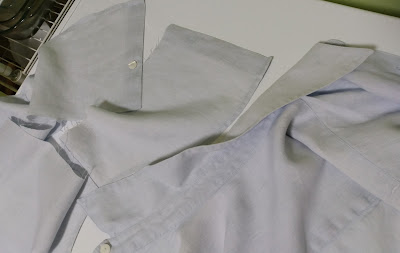 As you see, the tail, complete with one button and button hole, still available. Which gave me a cool idea. 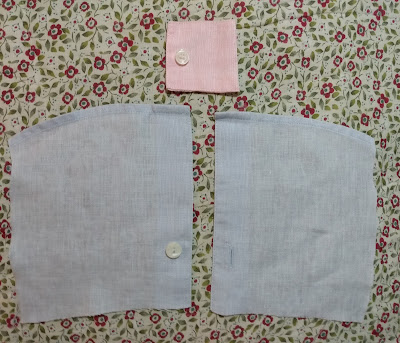 Before the cool idea, see that little pink item. It's a Tiny Pocket, a finger in the eye of manufacturers who love them. It's going on the chest opposite the side of the Useful Pocket on the pink shirt. More than one way to achieve balance. Small can weigh large. And a couple of square inches of linen can be a political statement.
And the cool idea is: these two cut out pocket bits, where the shirt tail curve is the pocket top, very well finished already, the front side finished, too, and only the hem and underarm side need my finishing.
Tune in here for Simple Stuff I Can Do to Get Pockets and Smash the  Patriarchy.
This will happen tomorrow in daylight.
Meanwhile another version of pasties, this time they probably have a name I don't know, and if you do, please say.
Granny Smiths, with nutmeg, cinnamon, golden raisins, small amount of sugar, usual tortilla dough except bolted flour.
The flour is very delicate in this recipe, probably needs regular wholewheat combined. That's why it looks a bit lacy. I mean artisanal. 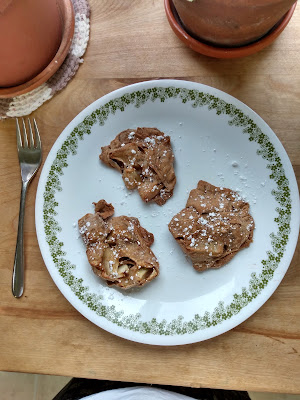 They were very good though, plenty more to come, and triggered another Clever Tip for Cooks Running to Catch up with the Big Kids.

I finally got around to finding a little shaker for the confectioners sugar, see here. Filled it before I could say I was too tired, and there it is.  This has taken years to accomplish. 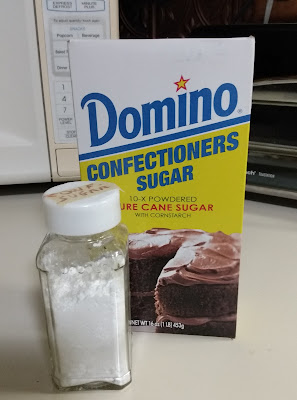 When I was first learning American labeling, a friend who cooks and bakes like a pro, gave me a handwritten itrecipe for her lemon bars, which I've since made many times for appreciative audiences.

I noted the abbreviation she used for the sugar and asked her "what's this ten times sugar?" Such a look of compassion she gave me, never forgotten.

And now it's short stories and chai. 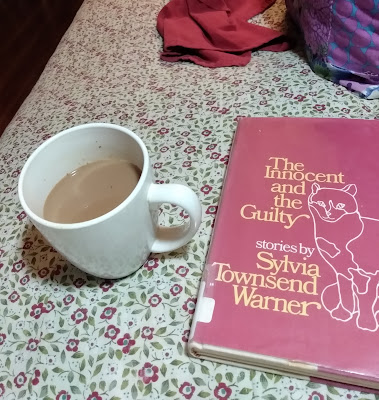 If a Brit invites  you to tea, you're not going to get a cup of hot water with a teabag in it.  You've been invited to a meal, all baked from scratch. At my house, anyway,  including the bread in the little sandwiches, and the jam, a couple of kinds of cake, maybe a savory, and a fresh pot of tea, choice of lemon or milk. Nice cups. Napkins. Clean tablecloth.

When an Indian offers you chai you get this recipe I made, made slowly and with care, with milk.

Yet chai just means tea. And you can get spice mixes called chai which are lovely, but not the classic Indian recipe.  It all depends on context.

I blame the English for all this confusion. For everything, really.

When I was a child we had neighbors, friends of my grandparents, who had tea daily. I am not sure why. Neither were English. Still, they practiced the ritual and once in a blue moon, we were invited. It was so fun! The lady of the couple read tea leaves.
I love your pockets! I was just telling Jessie a few weeks ago that I think about putting pockets on all of my dresses that don't have them. "You should!" she said. She's right.

Do put the pockets. You'll love them and wonder what was the point before you had them!

I agree, it's all England's fault. They have a lot to answer for.

English is a confusing language and we have no problem stealing words from other languages and making our own definition.

I bet they messed up the weather too!

Tea in my youth always involved a teapot and loose tea. Teabags came later and the cup with the bag is an abomination really..

"Simple Stuff I Can Do to Get Pockets and Smash the Patriarchy" - you go, girl!

I could write a treatise on animal friends (my best teachers). So I won't. :-) Love the cicada/neighbor youngster story!

You were so kind to that kid. Every kid should have experiences like that.

I'm stuck on what the cicada was thinking when you pinched its butt. I'm squicked out that you touched it at all. Actually, I admire you, but squicked out nonetheless.

I didn't pinch it. My little friend did. She stopped when I suggested it might be hurting. I see insects as little animals, no trouble handling them unless they seem to mind.

I went back and edited because I hadn't realized the dialog wasn't clear.

Hi Liz, just stopping in to say "hello" and let you know how much I love & miss you. Sorry to be so absent lately. You came to mind because I just met a person who serves as the chair of the Princeton Environmental Commission, and of course when anyone mentions Princeton I immediately think of you. ::hugs:: from your cyberneice

Hi back, Trish! Just thinking about you the other day abd hoping all's well.

I love that a youngster would want to come and show you her treasure - she knows you are interested and that's a good thing. And English 'tea' is something to be experienced as much as possible. Question out of curiosity - are cucumber and cream cheese sandwiches an English 'thing' or is it something that the rest of the world has decided should be?

I never heard of cream cheese in cucumber sandwiches. Usually thin bread, no crusts, butter, cucumber very thin, that's it. In our house sometimes cucumber with vinegar. But if cream cheese improves cucumber, I'd never argue the point!