I tried the chai last evening, as a replacement for my golden milk, and it went pretty well. The mix is a bit heavy on pepper for my taste, but it's a great improvement to hold down the sweetening. Just enough sugar to oppose the spices is fine for me.

You use just a couple of teaspoons of the spice mix, simmer several minutes in a milk and water mix, strain and drink. 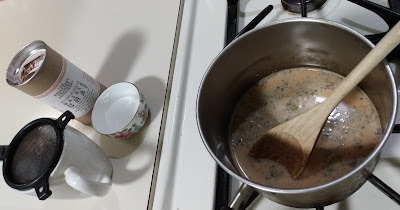 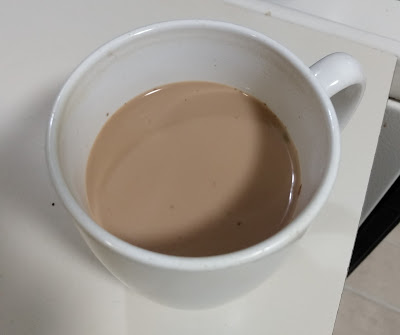 I might start trying out my own mixes. There's no ingredient list with this mix, but I identified cloves, cardamom, fennel seed, coriander seed,  caraway seeds, nutmeg, ginger and the base black tea, very finely ground tea though, not the big leaves. All of which I have.

And I found out how to dry the mix after use, by accident. I'd emptied the strainer back into the pan, thought it was switched off. Well, it was on the lowest setting. Good thing I went in there later, before the pan burned through.

So I now have a little collection of dried spices which might work nicely the next time I make crackers. They still have flavor but it's muted, after what it's been through.

Today was a pasty day, mushrooms, hot sausage, onions. This is enough for two filings. 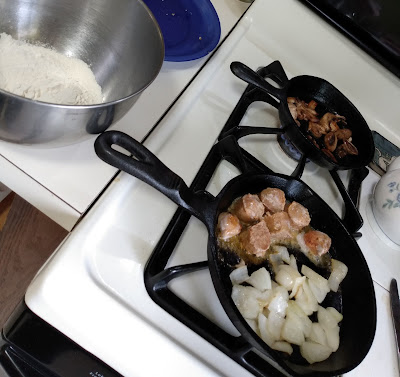 And it was a day for while I'm at it cooking, meaning the oven will be at 400°f for the pasty baking, so I may as well roast a head of garlic while I'm at it.  Pasties need about 20 minutes, garlic nearer an hour.

So the garlic, muffled in foil, drizzled with olive oil, then completely enclosed, set into its own pan, went in while the dough was resting. 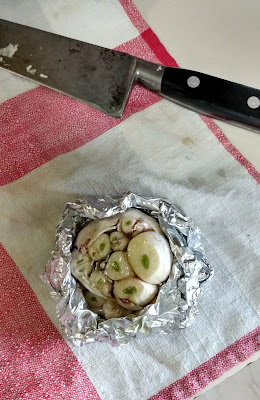 Today's dough, it's different every time, was lovely to handle, velvety, not sticky, just a treat. I rested it only 20 minutes, not the official hour, but I wasn't making tortillas, so I think that counts. And I pretty much guessed the quantities. 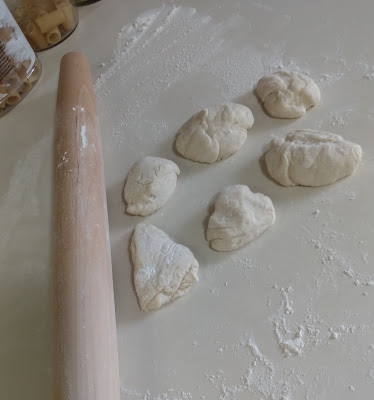 I remembered at the last minute that I needed Parmesan cheese. And that it was solidly frozen. So I thought arghgh, then, wait, I bet my microplane will work for this. I mainly use it for zesting. And it did work lovely. 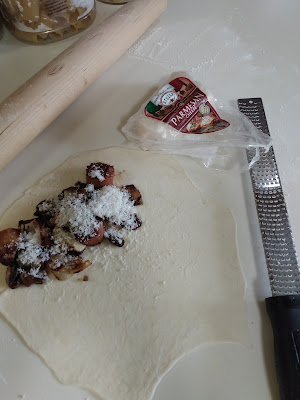 Then when I was cleaning up afterwards, I noticed on the blade guard

Now, no fair expecting me to read it. I was just feeling so smart for having this cool idea.
Anyway, a nice lunch happened, despite the cook. 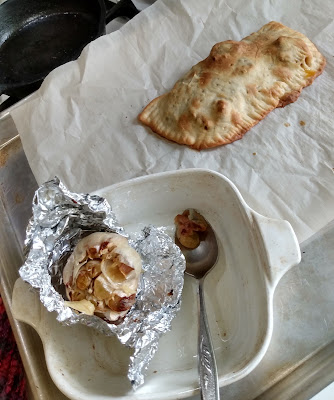 Here's the garlic nicely roasted to where you can scoop it out to spread. The spoonful shows you. This will go into a jar for all kinds of uses, including garlic bread. 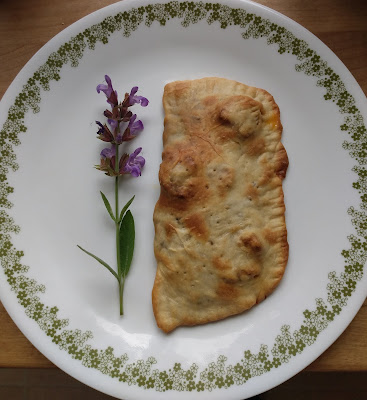 And the pasty was pretty good. Dressed up with a sprig of sage. See the blossoms? Like snapdragons. Also known as antirrhinums.
The rhin bit tells you noses are involved, and it turns out this muzzle shaped flower head is named from its resemblance to a calf's nose! It's a brilliant piece of engineering.
That front petal bit serves to stop too small insects from pollinating it. They have to be big enough to push past it, so the designated bees get in and wannabes don't.
I saw this in action when I picked it, a couple of tiny insects trying  unsuccessfully to get in, and sort of wandering around looking for another door, I suppose.
It occurs to me, a bit slow on the uptake, that cooking and inventing in the kitchen has taken the place for me, of making and exhibiting art.
It's an art form, as one of my art teachers pointed out to me reproachfully, when she found a few years ago I wasn't much into food, at least talking about it.
It's art and invention and skills and technique and realizing connections you hadn't before. Just like studio art. And letting things happen and experimenting and listening to your materials. And rarely following instructions.
I'm finding that when I would go into the studio in the past is when I go into the kitchen now, with much the same attitude. Just a general idea, which will become a meal on a plate.
Sharing with Handsome Son and neighbors is the new version of the art opening.
Cool.
Posted by Boud at 1:56 PM