A sighting and a harvest

This afternoon just feeling a bit dull, too hot to walk, when I noticed a bit of activity on the patio.

Thinking goldfinches maybe or butterflies, both in short supply this year, I peered out, and saw, wheee a hummingbird! First this year. That instantly cheered me up, and reminded me to see if my container of potatoes was ready to lift yet. 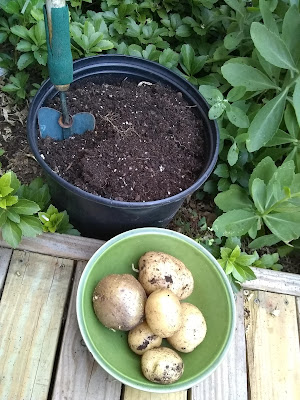 And they were, couple of good meals there. They're the golden skinned, not Yukon, something else, which roast wonderfully with that cheese crust I like.

These grew from a small potato with eyes I planted a few weeks ago. I'm surprised they didn't rot in the endless rainstorms.

So the day suddenly improved quite dramatically.
Posted by Boud at 7:41 PM 2 comments:

Scene: indoors, mid-afternoon, July, temp in mid nineties, feels even hotter, who cares, once it gets up there, might as well be 150f. 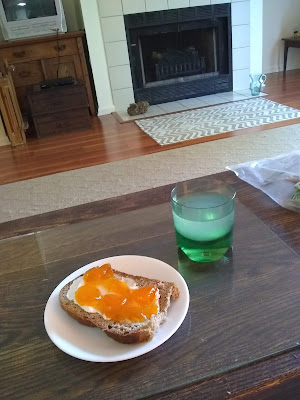 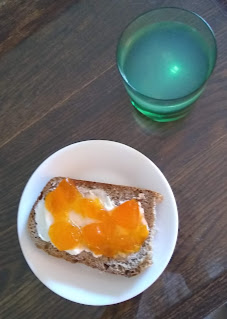 So the seasons being all mixed up this year, pansies still blooming which are usually gone early May, daylilies bang on schedule, Rose of Sharon two months ahead, honesty likewise, I thought I'd check the potatoes and the honesty.

Potatoes not ready, late this year, honesty ready to harvest for lovely addition to everlasting flowers, and for replanting the seeds. 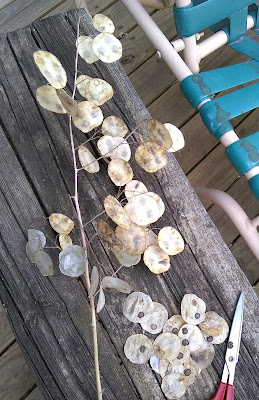 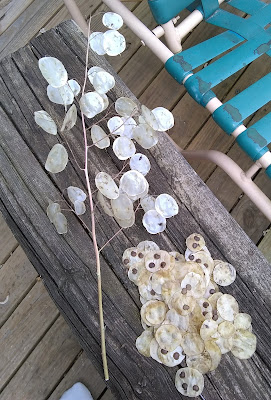 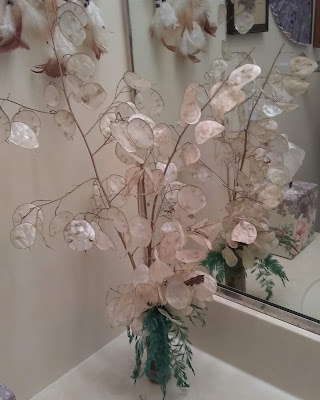 I love gently rubbing the seedpods to expose that silver disc, and the seeds embedded in it.

So that's today's gardening in the short time I can be out in the heat.

Also happy to announce the departure, as of yesterday,  of a huge and ugly dead limb on my wild cherry, courtesy of next door neighbor, on condition I kept the rest of the tree. He hates to cut, but wanted to help me.

Original plan was to have yet another friend,  in the tree business,  fell the whole thing and just leave the suckers coming up from the roots. Then his sister, who's a neighboring friend, would have the wood for lovely cherry fires.

But his sick wife and desperate home situation made it impossible. This was the fallback. And now I can see it, it's better than removing the whole trunk. It won't fall on me now that fifteen foot dead bit is gone. 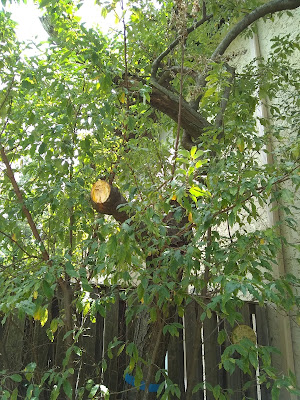 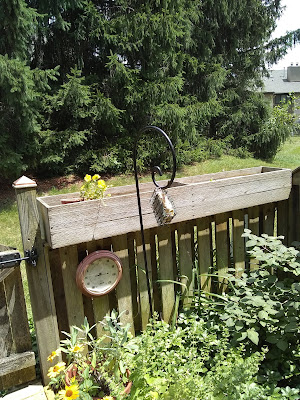 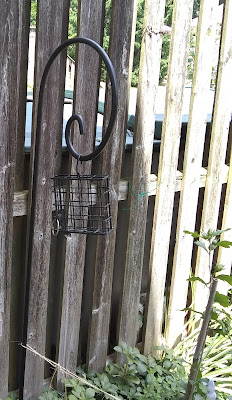 I've been nervous for ages in case this came down on me, having had a near thing with the previous branch after a storm. This gnarly dead old branch reached right across the patio.

Now it's cherry firewood for another neighbor, husband of the sister of the tree feller (both senses), if you follow me,  helped with the cutting and hauling away. Same fireplace, different route to it.

It looks a whole lot better now. And I set up shepherds' crooks for birdfeeders so they won't suffer from the departure of that limb.

I also note that squirrels have been totally unable to turn the feeder round two full turns to get it off the crook. And the split ring keeps it locked. They still feed but nobody gets to snaffle the entire feeder and drag it away so I have to search for it under the trees.

Then last night Handsome Son took us to the local Fourth of July fireworks, postponed because of wild storms last weekend. Lovely evening, great display, including some unofficial ones going off at a local business. Surround sound effects.

This has been a nice, if hot, weekend.

Musings on craft ales and other summer preoccupations

Since it's definitely summer now, high temps, high humidity and thunderstorms, I have switched to pale ale. 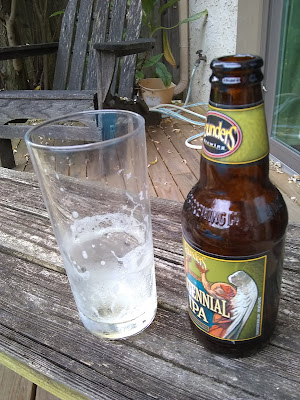 Wine works better for me with hot food.

And I've made a a couple of happy discoveries. One is that a glass of ale goes down very friendly, with no agonizing rolling about an hour later, which is why I abandoned my nice glass of red each evening some time ago.

The other is that craft drinks come with their own literature. Get this: 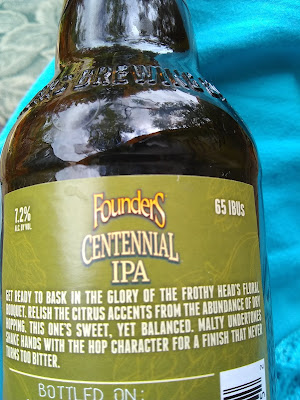 People seriously write this. I thought it was only wine that inspired these purple passages, but it turns out ale does too. Strikes me as a bit beyond the pale..malty undertones shaking hands with the hop character. All sounds a bit Bertie Wooster to me.

Perfect timing since I'm rereading for the nth time Less Than Angels, my favorite of all Pyms, where collecting wine booklets becomes a bond between Catherine Oliphant and an unlikely suitor. I definitely see her point.

My summer entertainment is all set. I wish now I'd noted the similar flowery prose on the craft ale Handsome Son and I had to celebrate his late father's birthday. I could have started my own collection.