First, the Inner blogger needed to deal with food. Namely what about the butternut squash and red lentils there? I'd baked the squash last night, idly thinking about soup.

But today I was penetratingly tired of making soup, and it occurred to me that I need a little something in case Handsome Son drops by. Why not banana bread only with bnut squash? 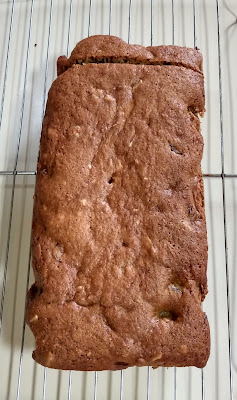 No sooner thought than mixed, adding in chopped walnuts, sliced almonds and golden raisins. That Polish beater is the best, definitely, so much more even mixing.

The rinds and seeds went out for Butternut Boy's pleasure. I saw him the other day rummaging about in the ground cover and retrieving a pear core I'd tossed out earlier. He knows where to look.

Still quite a bit of cooked squash, now in the freezer for when I feel like soup again.

Then the red lentils. I boiled them, mashed, added a nut of butter and a bunch of ginger in dice. Nice side dish if ever I decide on a main.

Then a cup of tea from the thermos, that worked quite well, abd a sample slice of bnut raisin multinut bread. Ready for today's textile adventure.

Today's presentation was on prayer rugs and the Islamic tradition of design and purpose.  It's based in notes on the ongoing research of the presenter, a kind of advance view of work to be published next year.

The sound was muffled, so I had to settle for the gist, but the slide images spoke for themselves. The discussion is mine, drawing on my own background in art history and religious iconography, as are the conclusions. Any blunders are mine, ss usual.

In fact, though you probably realized this a while back, though I didn't mention it, most of the conclusions you read in my textile presentation blogposts are mine, based on what the presenter said. I draw on my own knowledge, such as it is.

Back to the presenter. She explained that the prayer rug, usually about three feet by six, to accommodate a single person, has the arch image indicating both direction, to face Mecca, and the metaphor of the opening, leading to God through prayer.

In mosques, the floor covering is a series of ranks of the prayer rug design, so that the faithful can pray in straight lines together. The straight path has significance, too. 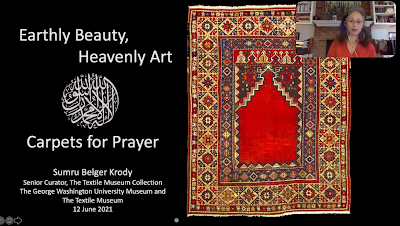 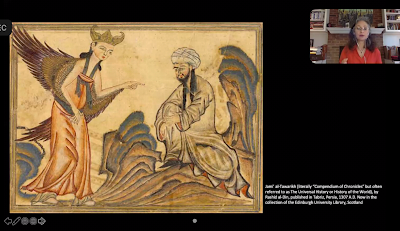 Here's the Archangel Gabriel appearing to Mohammed, inspiring the founding of Islam 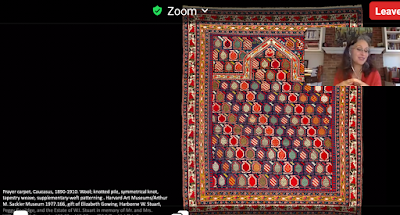 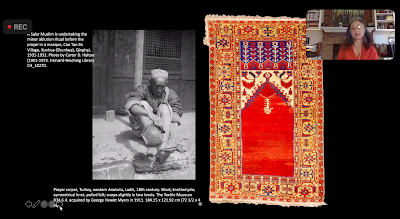 Prayer is preceded by preparation, washing, so that a clean body and willing spirit, in a clean place on the rug will be present to the communication with God. This is a ritual seen in other religions, too, out of reverence. 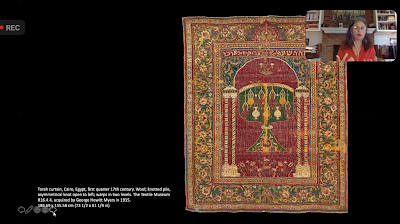 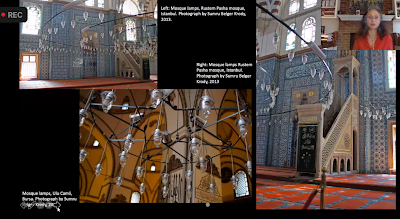 The literal and metaphorical concept of light refers to the divine presence and how it illuminates life. Lamps appear in the imagery for this reason. 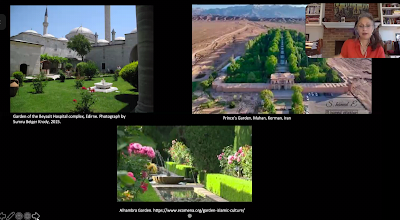 And here's the embodiment of paradise as a walled garden, with a gate to enter by.  This idea recurs throughout literature and holy texts, as a celebration of the gifts of nature and our stewardship. 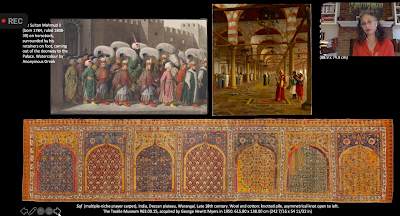 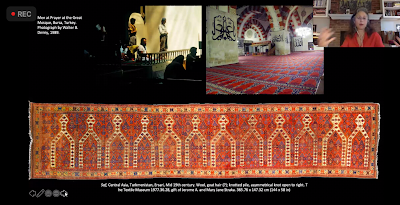 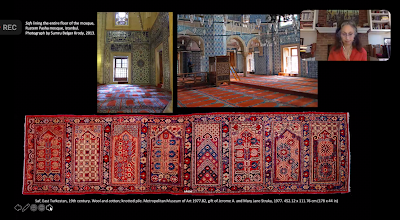 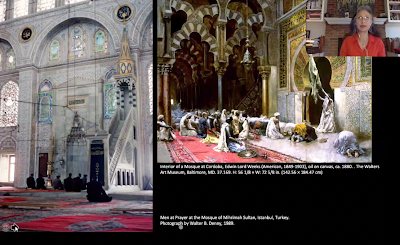 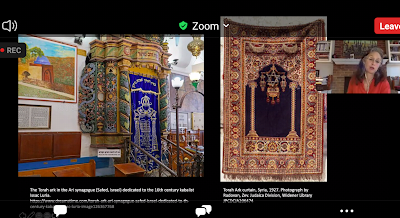 The arch symbol and meaning also appear in the curtains of the Torah Ark in Jewish synagogues, too, and were even made by the same artisans for both mosques and synagogue.
During the q and a she explained that women do exactly the same procedures in prayer,  but usually at home.  They may also pray in the mosque, in a separate section. But it's accessible to both sexes.
Prayer rugs can be woven, or knotted, or embroidered. The oldest known rug, in the Hermitage museum, dates to the 1400s, but there were probably many preceding it, Islam having been founded in 610 AD
Another free gift from the Textile Museum. No charge, no membership needed though they'd love it. Just sign up, they send you the link and reminders.
Another quiet day chez Boud, nothing to see here, move along now..