First I would like to ask those blogistas who pray and keep prayer lists please to add my Indian friends.

I'm getting bad news from Mumbai. Local friends all have family there. One mother has died, a lady I met when she visited a couple of years ago, her husband and daughter now in the hospital. Another friend's sister and brother in law had covid and seem to be recovering, but it's a treacherous virus.

It's intensely hard for them to be unable to go there to visit the sick, or for  ceremonies, if there even are individual cremations. So we can pray or send good vibes, whatever our own practice is. Please do.

On to trivia, the dryer is ordered, deposit made. The lettuce continues to sprout. 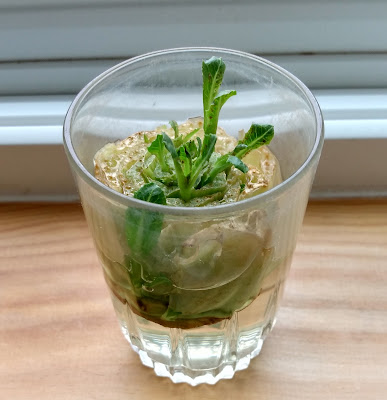 It's on the window ledge Artist Contractor Michael, hitherto referred to as ACM, made for me from a piece of raw pine he ripped to size and gave a soft low gloss finish. That's what I think would make a nice mantel at the condo. It goes very well with the white window frame, so the color might work with a white fireplace. We'll see what he has to say, and has available.

And thanks to Joanne, I'm deep into another book at the same time as the current ones. It's excellent, and I'll read more of her 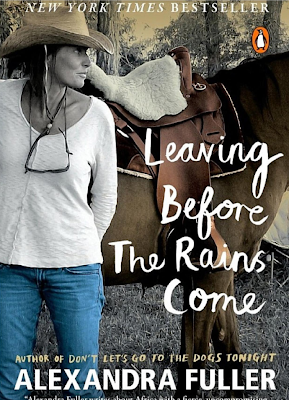 It's the account of her marriage, when she lived in Zimbabwe, to an American, and the life she lived  between her Zimbabwean family and her American marriage in Wyoming, and its eventual breakdown.

I identify with some parts -- the Brits going to what was then Rhodesia, as my brother did, establishing a building business, white people marching in and assuming a lot, losing a lot with the growth of independence, eventually leaving in disarray before Zimbabwe was founded. Some similarities with her family except parts were there for generations

Also her intense marriage between people who each needed to live alone under their own roof. I lived that and the happiest period was when we literally had our his and hers roofs.

Anyway it's about her, not me, but really is gripping me as I explain.

Then the Return of the Pasty happened yesterday.

All Misfit items -- flour, baby bella mushrooms, yellow potatoes, white onions. I added in a bit of mushroom sauce I had in the freezer from when I made gnocchi. 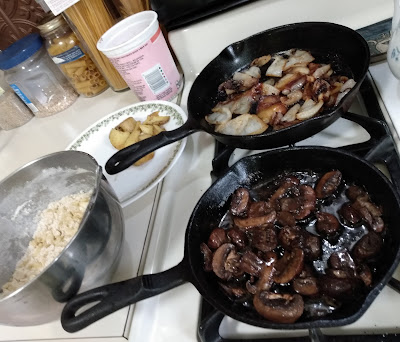 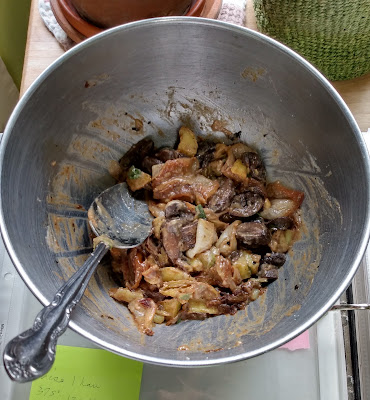 I had roasted the potatoes the previous night, and had some with a cheese omelet. So, mushrooms sauteed in butter, onions caramelized in salt and oil, potatoes in waiting. All mixed and cut down a bit for the stuffing, bit of sauce added. The smell was great at this point. 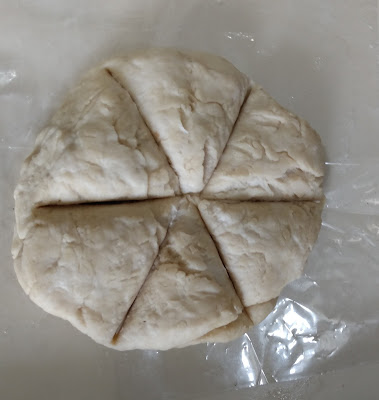 Here's the optical illusion. It changes from convex, as it is, to concave, very confusing. It's the dough cut into six fairly equal sections, one per pasty. Usual flour tortilla dough.  Last time I baked at 400° for 20 minutes. This time 375° for 30 minutes. No discernible difference! 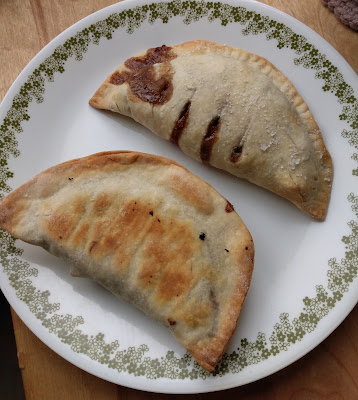 One turned over to show you the nicely browned underside. 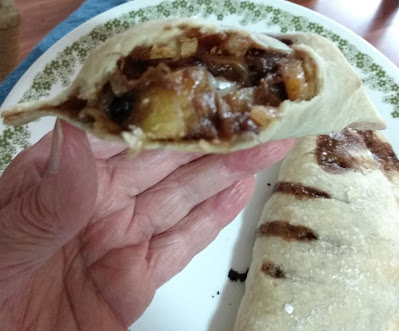 I added seasalt to the outside, before baking, brushed with olive oil,  no salt in the dough. And found I ate both. Really good. The picture is blurred by rising steam.

Enough sauce for one more pasty. Then enough dough in the freezer for three more with different stuffing.

After which lunch I lay around like a python for a while.