Did I mention we had a massive storm last night, tornado warnings, very local, massive rainfall, most roads closed around here with water everywhere and trees down, local police rescuing stuck cars.

It was pretty hair raising for a couple of hours. We do occasionally get tornadoes, one tore the side of a neighbor's brick house off, a few years ago, but we don't get them often enough to be experienced.

So I was surprised when the Misfits box showed up early. I thought the road closings would hold them up but nooo.

So here we are 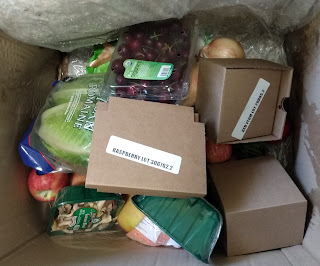 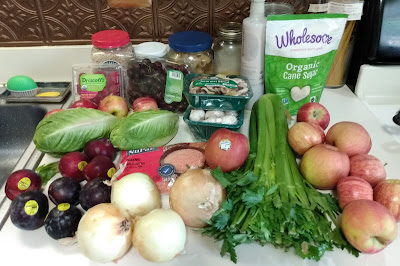 Taking full advantage of the summer fruit season.Couple of hiccups. My flour wasn't packed but a mysterious bag of sugar was.
Misfits refunded the missing flour in about an hour from my email explaining. They're very good at this, cheerful, fast, and it's not anything big, after all.
I came out with a windfall of sugar, and I can manage for now without the flour. I'm more pleased over the number of things they get right, really, than the occasional mia item  which I told them. 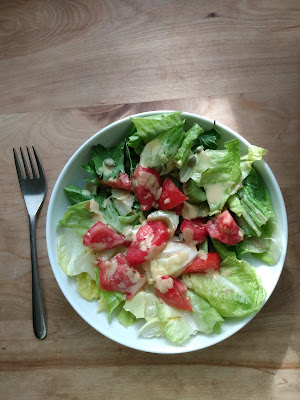 And here's my Friday evening salad, tomato from next door, Misfits romaine lettuce, celery, same dressing as yesterday, with capers.

And an email about the saga of the fencing. A second site manager left in a rush last week, and now the regional manager is running things. So far Fence 2, site mgt 0.

Email Friday afternoon, to say fence work starts Monday. Lot of notice, no? Complete with demands for stuff to be done or else. At this point all the foliage and shrubs I cut back at great labor have all grown up again and it's all to do again, sigh.

So I decided to do a bit a day, it being heavy hot work I'm not quite up to. And I actually managed to pull and cut one section of pachysandra and foliage from one section of fence.

Then I bumped into Gary returning a spade to my storage place where I keep the neighborhood gardening tools. They're mine but anyone can borrow, and frequently do.

He didn't know about the fence update, but when I explained, well, whined,  said nah I'm going to take care of that foliage, free next week. Asked if he has a weedwacker, he remembered he does, somewhere. So that will simplify matters a lot. And I feel a lot less stressed.  We'll get this.

It might actually be fun weed whacking the overgrown pachysandra. He's worried about killing it, and I assured him it will be be encouraged, not  wiped out.

Always something. If it's not the weather it's the HOA, which acts like a force of nature at times.