Yesterday's Textiles and Tea was a great presentation by. Navajo weaver Venancio Aragon, observing his cultural traditions while making his art his way. As you see. 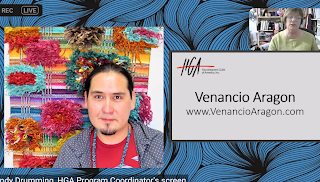 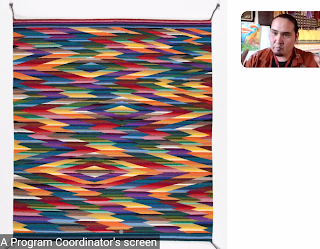 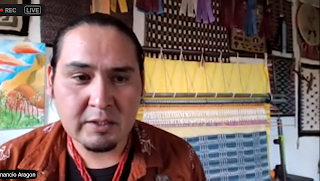 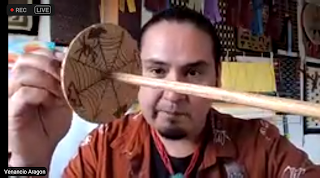 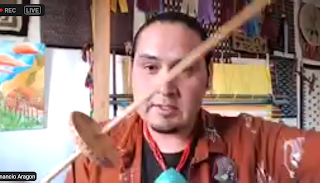 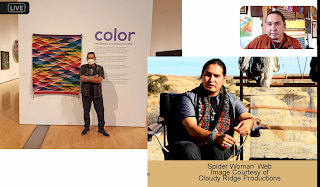 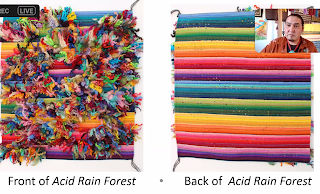 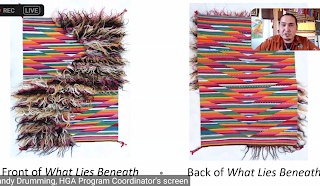 He works with tufting, where locks of wool are inserted, not knotted, into the work, which is beautiful from back as well as front. He refers to his bright color ranges as his Rainbow Aesthetic .

He shows, at the Heard Museum and elsewhere annually,  with his mother, tapestry wall hangings. He also weaves functional saddle blankets, seen behind him in his studio.

He spins the yarn he dyes, too, using all kinds of spinning tools from an electric spinner to the Navajo spindle he shows here, made for him and inscribed with significant graphics. He also honors Spider Woman, the weaver seen above with her loom.

Very knowledgeable about cultural and political history, he discussed the Spanish influence on Southwest weaving and design, and quickly had presenter Kathi out of her depth, but was very courteous about helping her back to dry land, with a good humored touch.

Meanwhile back on earth 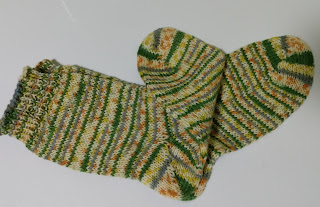 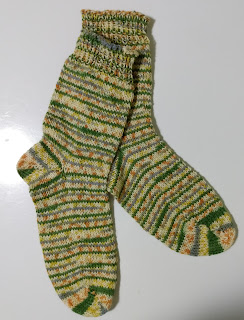 the socks are done, two views, ready to dance.

And the new pair-in-one is cast on. I'll let you know how it goes as it goes.

Also the chilly weather, too soon for the heating, caused the return of the Jacket of Many Colors I knitted last year, from rectangles in that technique whose name I will remember as soon as I publish this post! 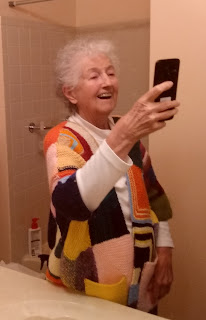 Handsome Son visiting today, happy about his miniature cat getting attention, and reminded me that he'd made and discarded several cats before deciding this one was worth painting, no regrets. His mother's son in action at six years old!

Happy day everyone, we'll be eating crumble with our tea.

Labels: Jacket of Many Colors, Sock Ministry, Textiles and Tea