Handsome Son visited yesterday, approved the crumble and demolished a large helping. He also helped me with the issue of my sister's Celebration of Life, next Sunday at her house in Ontario.

I had been wondering about writing a little something for my nephew, who seems to be organizing everything, to read as part of the event and couldn't think what, the relationship not having been unmixed. Also I didn't know her as well as you might think, she having emigrated when I was very young. I'd seen her a few times at long intervals after that.

But he made a couple of helpful suggestions, he's really a good person to think things out with. Nonjudgmental, tactful. So now I'm set to write a little something.

I just read this 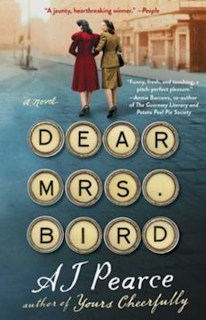 A fast read, sometimes funny, sometimes tearjerking, but good distraction when you aren't up to thinking deeply.

It's set in wartime London, in the Blitz, the main character doing fire watch by night, office work in a women's magazine on the Mrs Bird column by day, sleeping when possible. The style is breathless beach read, though the subject matter isn't.

I'm about to embark on the next of the series, newly out, because I need distraction from today's dental work.

And I find a few minutes now and then with the current jigsaw is very calming, just a few minutes thinking only about shapes and colors.

Speaking of puzzles, I follow Haggard Hawks the etymologist and love the esoteric musings on word origins, always a word geek

Now and then they post a little puzzle and though I don't do puzzles much, once in a while, it's fun.

There's a kind of unwritten secondary fun that goes on, where other posters who have solved it, instead of posting the answer, post funny clues to it, extending the game.

Then there's always the heavy foot who doesn't grasp this and says what's the matter with you all, this is the answer, and posts it. Arghghgh. But in a way, funny too.

Here's an HH if you're in the mood
- - - lpr - - -
The six missing letters are just two letters of the alphabet.
I'll post the answer later in the comments. It pays to read blogista comments, by the way, since some of the best material on the blog is to be found there.
Happy day everyone, life's a conundrum anyway, one step in front of the other.