From the large to the small, a short walk 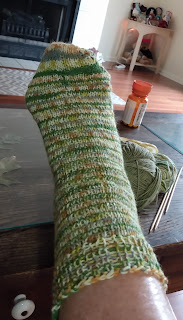 The second one only needs a few rows of ribbing and it's done. This pair is going to the Sock Ministry . Then I'll cast on for the two socks in one with the yarn I unraveled from the vest, for me, since the yarn is strictly handwash. 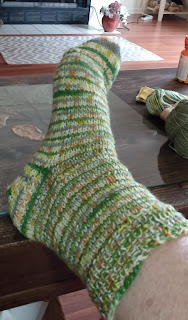 And since we got onto the subject of miniatures recently, I thought I'd check to see if I still have any to show you from my miniature making days, about fifty years ago.
That was back when Handsome Son was small, and was entertained watching me, and sometimes trying out a bit of his own, like this little cat and dish he made from home made clay and painted. He was about six. 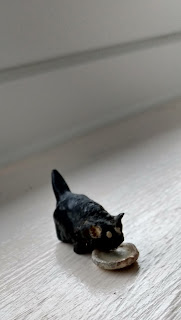 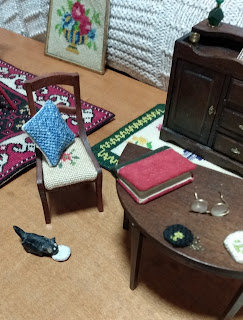 I've put a regular teacup below there for scale. These are one-twelfth size, one inch to the foot, the generally agreed-on dollhouse scale. I never had a dollhouse, but made vignettes and shadow boxes. 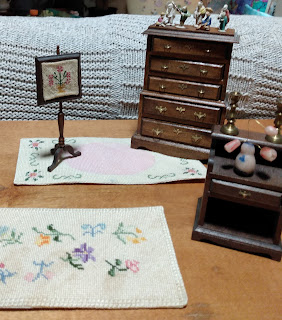 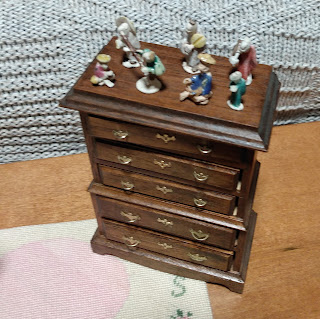 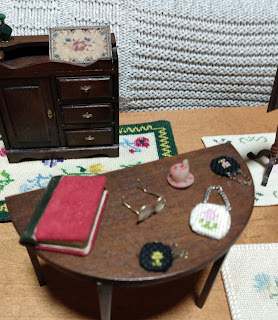 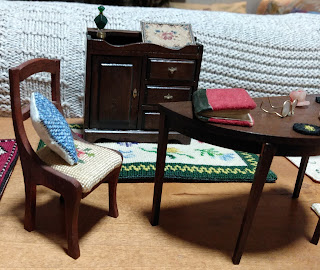 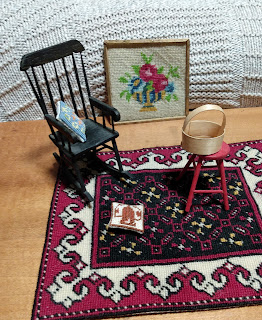 About the furniture: the formal items like the dining chair, half moon table and dressers, are kits from I think Scientific Miniatures.
They used to leave you to do the details for yourself, such as carving cabriolet legs, just providing the blanks.
I found that the finishing materials, varnishes and stains were not very healthy, particularly since you hold miniatures close to work on them.
So I switched to designing and making my own items from scratch, such as the red stool and the rocker you see here. A lot of what I made is in various people's collections now.
Then I was approached by Miniature Makers of America which I think doesn't exist any more, maybe joined into some other organization.
It was a national organization of professional miniature makers, and they were interested in jurying for a needlework exhibitor. They had plenty of marvelous furniture makers far superior to mine, but lacked miniature needleworkers.
So I sent pictures and samples of my miniature needlework, my own designs, and was accepted, and showed with them a few times. I found though that shows are tiring and the travel too extensive for the sales results, though it was an honor to be in the company of such artisans.
The other exhibitors would buy my finished work, but show visitors tended to go for kits. There were some lovely collectors who wanted the finished product and ordered from my list, but they were few compared to the numbers wanting kits once they'd seen the originals.
I ended up running a mail order Minipoint Stitching Club, a new original design every month, and had members in about ten different countries.
It was for an annual fee and I confidently assumed people would go for one year then decide that was enough, so I'd be able to repeat designs for new members.
But people re-enrolled, and I had to come up with new designs! I branched out into other forms such as drawn thread work and trapunto.  It was a real grind assembling materials for the kits, and writing very clear instructions, and after a few years I moved on.
I used to include everything including the special tiny needles, because most of my members were from remote areas where they had no access to materials, and it was before internet shopping.
With this isolation in mind, each month I included a one page chatty letter with news of my gardening and artwork and family and to my amazement I started getting the most wonderful letters back!
It was like the forerunner of blogging, real friendships came out of it, with people confiding in me. This was during a period of terrible agricultural slump in the mid and far west and I mourned with them over farms foreclosed and lost and equipment auctioned, and rejoiced in weddings and babies and new jobs.
For many women, most members were women, their monthly miniature kit was a lifeline. That's why I kept on longer than I had planned, because I couldn't desert these brave people. But I was amazed at how important it became, having started as a little cash sideline.
About the needlework you see here, the black white and red rug is a traditional pattern, not my own design. All the other rugs and pillows, upholstery and fire screens I designed. The pedestal firescreen stitching is 38 stitches to the inch, on silk gauze if I remember correctly. The purses were designed by request to go with some collectors' miniature dolls.
When you stitch at this scale you have to look up now and then to rest your eyes, and the real world looks huge.
About the accessories, the collection of mud men, Google it, is a find from a fleamarket I think, antiques, so niche that hardly anybody recognizes how wonderful they are!
The perfume bottle I made from beads. The little leather bound book is one of many I made and sold. This is why miniature makers love old kid gloves. The covers and corners you see here are kid, soft enough to work at this scale. I taught a number of groups how to make these books.
And in classes where I taught simpler processes, we did things like the Shaker basket you see, but in cardstock rather than balsa wood like here
And people would go mad with excitement at making eye glasses with real lenses!! You see a pair near the book.
Fun times, thanks for coming with me on the stroll.
Happy day, our fourth day of heavy rain, Ian still at it. Enjoy making and if you're not a maker, looking. 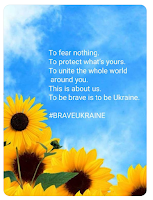