This is a PSA. Safety at Home

Speaking of grab bars and general safety, I thought I'd give you a guided tour.

I have a townhouse with two full and one half bathrooms, and a step down to the living room. Two full flights of stairs.

About eighteen years ago I started installing grab bars. I only use ADA compliant (Americans with Disabilities Act) or your regional equivalent.  They're designed to have the best nonslip knurling, the part you grab, the best engineered distance between wall and bar, the best gasket, and this feature, see below, which I learned about yesterday.

Don't shop online other than from a medical supplier, because there are loads of bars not engineered this way, not suitable for screwing into tile, no matter what they claim. Bathroom fitting people don't have to have ADA compliant bars. They're more decorative than useful, I think. Anyway a word to the wise. Back to ADA compliant 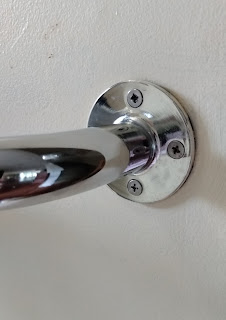 See how the screws favor one side? That's to enable at least two to be attached to the stud. The usual wide triangle used for railings is evenly spaced around the plate and it's likely only one screw can attach to a stud. This is vital to know, since a person falling and reaching for a bar can tear it off the wall otherwise.

The reason I originally started way back then installing bars was after Handsome Partner fell in the bathroom, grabbed the towel rail, which tore out of the wall and hit him on the head on the way down.

Next day I contacted Mike the contractor,  got three bars, one per bathroom, from a medical supplier, and he researched the approved installation needed, and replaced the towel bars with the safety ones.

As you see, on the left they still work as  towel bars. 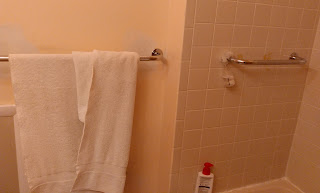 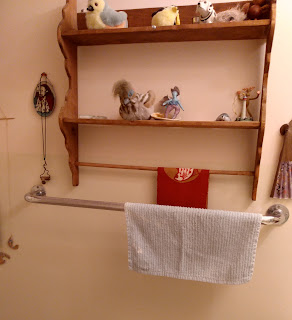 Later HP needed an assist to help navigate the step up from the living room to the downstairs bathroom, it's now also a handy parking place near the front door for masks, sunglasses and visitor car tags. 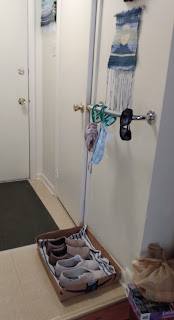 And bars in the shower to enable him to stand up from the shower seat. We measured this to fit his reach. It's on the right of the top picture.

Then stairs became more difficult and I had bars installed on the side where there was no banister rail. 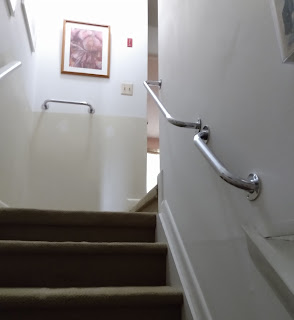 The reason for two bars rather than one long one was that he needed to grip the curve on the upper one to pull himself up. Then the bar at the top gave him the ability to turn onto the step up on the right there. That's the one Mike reinstalled yesterday, higher, to suit me. 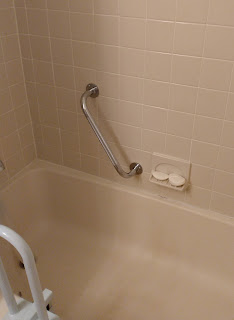 On the left you see the assist that clamps on the side of the tub which I installed myself.

I kept all the bars in place after Handsome Partner died, figuring sooner or later I'd need them myself.

Eventually he became quadriplegic, so the bars weren't in use, and I moved on to learn the skills of the Hoyer lift. All these stages enabled us to have a life, and him to be home to the end, as we both wanted.

Back to the present, I notice that even younger, able people tend to use the bars because they're there. Including a couple of friends who decided to install one near their own sunken living room, after realizing how handy mine in the front hall is, to alert visitors to the step down, averting a dramatic headfirst entrance.

Anyway for what it's worth, this is a tiny fraction of the adaptations we made over time.  In case it's useful knowledge, here it is!

Also while Mike was here, he the wood lover and worker, geeked out over the darning egg and dibber Joanne gave me. The dibber, he tells me, is white oak, the egg possibly beech. He loved them, handled them for ages after I explained their function, admired the engineering.

It's still all Ukraine no matter what Putin says. 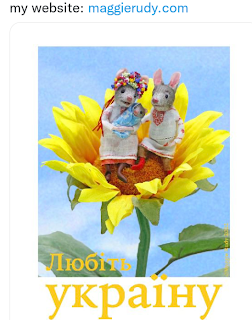