Return to yarn! and pruning

Yesterday was another beautiful day, eyes going along nicely, shoulder ticking over okay, so I ventured on 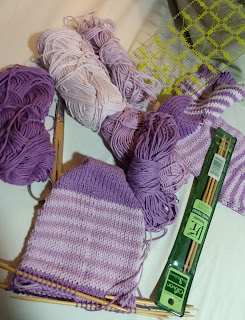 a return to the Sock Ministry.  After a few rounds my shoulder was fizzing and whining, so I set it aside till later, the sock, not the shoulder, then later did a bit more, and today it seems okay.

So that seems to be a good way to proceed. After I finish this sock, I'll have two pairs to send off.

And since I had to stop knitting for a while, I did a bit of pruning. The cherry bushes which yielded nothing this year, are now tamed 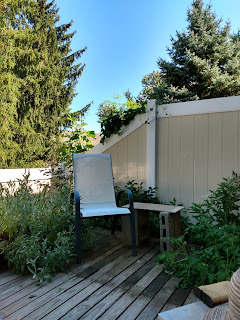 And since the morning glories never budded, just developed massive foliage, that went too, ready for when I need to put out bird food on the shepherd's crook. 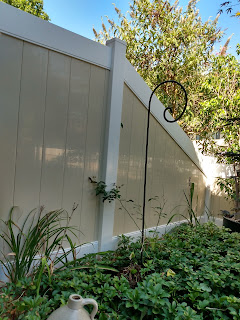 The cherry tomatoes are booming, very hopeful there, and the butterfly bush cluster is looking better and better, growing rapidly. 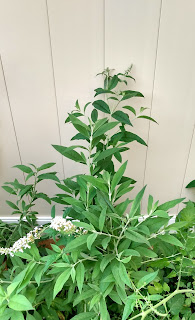 It will give food for birds since I won't deadhead it, and shade next year for The Great Me.

Bit more knitting today, maybe even risk a bit of cord making. With an endless background of audiobooks from The Number One Ladies Detective Agency. He must have been writing even in his sleep.

Today the NYT has finally crumbled and admitted that Biden and the Dems are doing well. You can see how it hurts, crying and screaming I shan't, no, it can't be true there has to be bad news somewhere, Dems in disarray and all that.

The NYT who wrote 38, count them, articles on Hillary's emails. And zero, count them, you can't, on her policies. I must admit to schadenfreude here.  I'm usually more forgiving, but they are truly not an admirable bunch.  And Dems are very much in array. Large helpings of crow on the NYT menu.

Happy day everyone, we're all in array. If there's a bit of disarray here and there, well, bear with us. 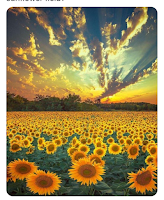 Your patio looks nice and greenly lush. I'm envious of the tomatoes (ours long gone with fall tomatoes not even ready) and other blooming things. Take care of the shoulder. We do need those things, you know!

Odd those morning glories never budded or flowered. Usually they're as prolific as Alexander McCall Smith!

Thank you on the NYT. I have felt this way for a long time. I'm pleased to see someone else sees it the same way.

It's good to be knitting, but you take it slow! My self-seeded-over-many-years morning glories are just starting to bloom.

Yes. Baby steps with the shoulder-using!
I have often said that Alexander McCall Smith must write a book a week. It seems like every time I go to the library there is a new one. The audio versions of the Ladies' Detective Agency series are such a delight. The narrator is a jewel. Have you read any of the 44 Scotland Street series? I love those too. Especially dear Bertie.

I've read a few of the Scotland street books and they're not as congenial. And there's a German professor series which I find worth staying away from. But the ladies detective series I love. I really like best the Kindle reading. I've got my own voices going for the characters!

Do birds eat the faded blossoms of the butterfly bush? Or bugs that live in the blossoms? We deadhead ours, but maybe we shouldn't.

I noticed a lot of birds feeding in the highest blossoms last winter, Gary couldn't reach them to deadheading. It looked as if they'd gone to seed, way too cold for bugs in Jan and Feb.

Your patio is looking lovely and is a great use of the enforced break. I'm glad you are taking it easy with the shoulder.

Beautiful patio, and yay about the NYT!!!

You put aside the socks to finish later. Very wise. We have to do things like that now. That’s why we are taking it very gradually on our bikes. My knees get cranky, but what we are doing seems to be writhing their limits.

Happy Weeding, always looks ni e afterwards.
The NYTimes, reminds me to buy newspapers to read instead of TV and Internet.

Best to set the kitchen timer when you sit down to knit, otherwise you could very easily forget yourself and overdo it.
Tomatoes on our balcony are a puzzlement this year. We bought the type we always do and expected we would get loads of cherry tomatoes. Well, we're getting some tomatoes but they certainly aren't little. They're too big to be cherry tomatoes and too small to be 'real' tomatoes which makes eating a tomato sandwich a tad frustrating when the tomato slices keep skidding out the edges. Oh well, at least they taste good!

I don't know which is more discouraging, NYTimes or WAPost. I can't afford both, so I'm currently entertaining the NYTimes.

Glad you shoulder is feeling better. Yay for the socks!

Morning Glory and seeding!!!! Some appeared in our little public garden last year so F nurtured them, gave them something to climb on...this year millions! They want to smother everything. It has been a daily battle to clear hundreds of little seedlings that threaten to turn the garden into a mono-culture. Are you sure about having that stuff in your garden?

Not a problem where they're annuals only. Our cold northeastern winters see to that.