Art equipment in the kitchen

Long ago, while I was doing printmaking, I saw some wonderful blind embossed work -- pressed without ink-- and fancied trying it.

I didn't have access to a printing press, so I tried a number of techniques, standing on the assembled paper and materials, rolling them, various things, none of which worked.

I ended up getting a little simple pasta rolling machine, thinking maybe I could get that to exert enough pressure to emboss. The small width was okay because my prints were small, so I tried it, on the closest setting.

And it didn't work either. Just didn't have the required heft. So I moved on in  printmaking to other techniques. Including hand embossing done with a burnisher. I taught this to a few classes who were thrilled at how simple the technique is. I'll blog about this if there's interest.

Meanwhile I had a pasta maker clean as a whistle, only touched by clean paper, other materials sandwiched in, not touching the roller. It was not returning to the studio. One of the few times the kitchen has received from,  instead of giving to, the studio.

So I thought self, learn to make your own pasta. You've had marvellous pasta in Trenton restaurants, where there's an old Nonna in the kitchen making it old style.

It totally beats even the best commercial pasta, which is made from a harder grain, and dried to be shelf stable. Your own pasta is cooked in a couple of minutes, very tender. So I did and loved it and then life intervened for a few years.

But yesterday I thought, I'll be giving handsome Son the monthly dinner soon, why not a from-scratch lasagna, noodles made to fit the dish.

And here's why I completely overlooked yesterday's knitting group, despite having decided after all to Zoom it. I got engrossed. 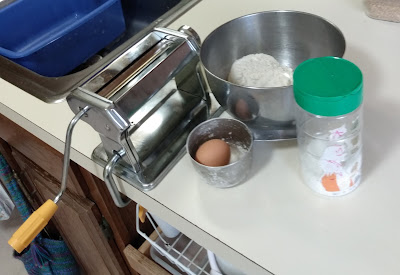 After mixing the pasta, added in a drop of water as I mixed, it needed resting for half an hour.

Then fun with rolling, starting at setting 9 then working down to setting 3. 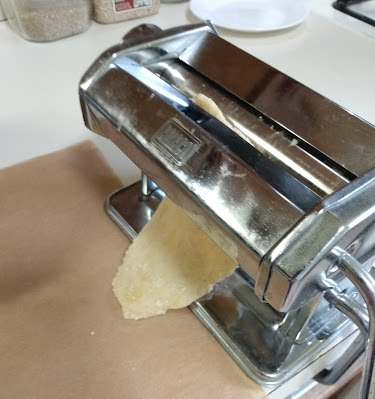 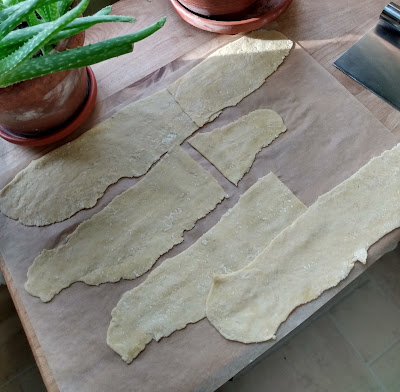 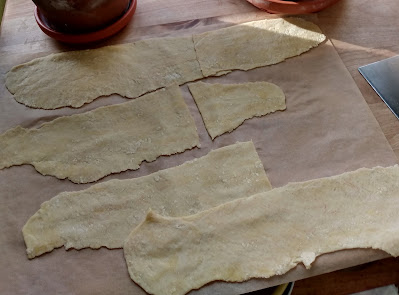 Several layers. They're on parchment paper, and now they're bagged flat and in the freezer.

I'm wondering if I need even to cook them before assembling the doings. They're much more tender than the boxed kind. I'll see.

Last night I only wanted a small meal, so here's a nice idea that really worked. 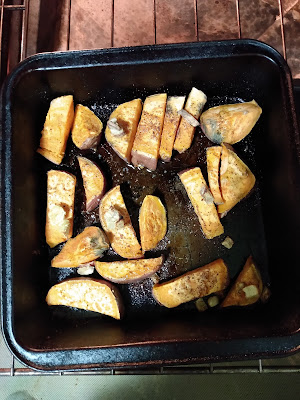 Sweet potato, microwaved for a couple of minutes so I could make it into fries, then salted, chunks of fresh ginger I had in the freezer, harvested from my own pot, 400°f about 20 minutes. 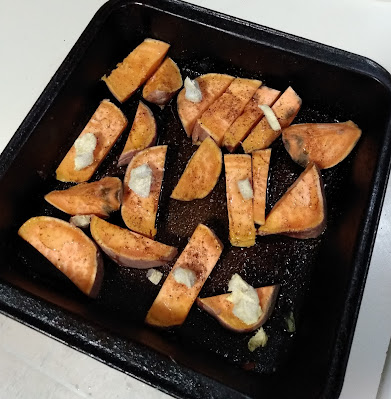 Enough for two helpings. I never roasted ginger before that I remember, but I'm going to do it again.

The weather's been bright but cold recently, in the teens Fledermaus, and suddenly there are birds at the suet feeder. I can't get good pix, take my word for it.

Yesterday, first time in two years, woodpeckers showed up. Several visits from a red bellied, or maybe it was more than one, one from a downy. And the usual crowd of house finches, Carolina wrens, bluejays,  juncoes, and a new visitor, a white-crowned sparrow. It was great.

I finally gave up on the other feeder out front after several months of no traffic, and all this action was on the patio at the back. It's more protected, easy hiding places and shelter.

Also I can bird from the sofa on freezing days, always a good thing.

Let me know if you wanted to see the embossing technique, and I'll set up pictures as s step by step. Maybe Valentine cards.

We bird from our sofa too! All our feeders are in the back, within easy viewing of the living room.

Bravo on the homemade pasta!

I was telling a friend recently that never in my life had I made my own pasta. She was shocked! I think I might try my hand at it soon although I believe I will start with rolling by hand. Is this possible? I know nothing!

Yes, you can roll by hand. I have a giant wooden roller from a friend, which is really a pasta roller. I don't think it's any different from rolling any other dough, really. The machine just gives uniform thickness to make even cooking. Also it's fun.
I bet the kids would like this. It's a machine!! Safe, too.

Yes to emboss technique!
Downy woodpeckers are scarce here because I have yet to put out suet.
Pasta machine for homemade, looks good.

I would love to see your embossing technique.
I thought for sure we would be making our own pasta by now, but we never have. I have a lovely pasta roller that has never been used.

I'll be very interested in reading how the fresh lasagna noodles work in baking. And the embossing technique - yes! Wondering if I have done this myself with a stencil of some sort and something to press the paper into it. However you do it,I'm sure there's something to learn from it.

It sounds as if there's a population movement towards embossing. Well, three people are interested, so I'll attend to it.

I think either you make pasta all the time or you keep meaning to but don't quite get there.

I buy homemade egg noodles from a Czech family here in town which reminds me I need to get more as we've eaten all the last batch. But yes, show us the embossing technique.

We made homemade pasta with our little machine. My daughter was so fascinated, she wound up with the pasta maker.

What a wonderful selection of birds you get at the feeder. I am envious!

My son's mother-in-law always makes her own pasta - she's Italian in Italy - and Younger Son was teaching his children how to do it last week when they were off school.
And I love sweet potato oven chips.

Liz the English language doesn't seem to have a word for the relationship of two mothers in law. I bet any money other languages do. I'm betting on Arabic for one.

Anyway it's lovely that the children are learning this traditional skill. Good for your son for teaching them.

#1 son was gifted a pasta machine at Christmas and has been enjoying the proceeds. We're hopeful that we'll be on the receiving end of some of it at some point. I had a thrifted machine back in the day that I used for polymer clay for a short time - until I realized it wasn't for me.

I will be giving a pass ta handmade pasta although I am sure that I would live it if someone else would make it.