Great timing today. I was at the door enjoying the sunshine when the delivery van arrived and the driver kindly lifted the box over the step and into the hallway for me.

That's the hardest part, since it's not only heavy but too big to get a grip on. The hefty drivers just pop it on a shoulder and trot to the door with it. I struggle to get it indoors to unpack even after I've opened it and ditched the freezer pack, which weighs a couple of pounds itself.

But all is well. It's complete, in good shape, arrived early afternoon. 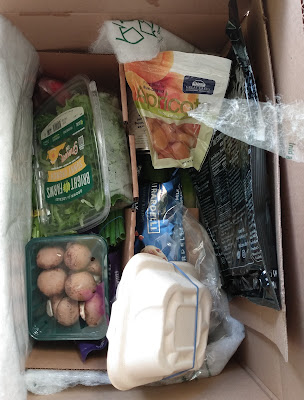 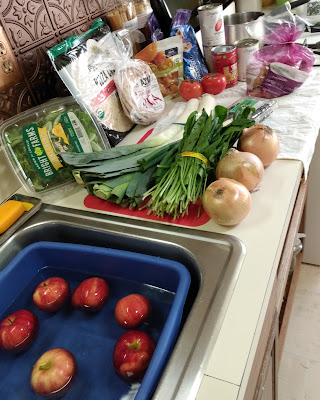 And now after a frenzy of washing and scrubbing and chopping and bagging and labeling, it's stored. And after wiping the counters and mopping the floor.

Today I added in making stock from the trimmings which I've been adding to a bag in the freezer.  I wash all the produce before cutting, so there's a minimum of grit in the trimmings, always good for stock.

I strain it twice anyway to he sure.And I have a couple of quarts of stock in the freezer now. The picture of which won't load, but okay.

On the food front all's well. On the household front not quite so much. A kitchen outlet suddenly stopped working. I reset the nearby GFCI, and it didn't work. Hm. Moved the microwave and toaster oven to a different outlet. Worked.

So maybe there's a screw loose in the dead outlet. If ever I see Gary again, I'll ask him to look. I've exhausted my electrical knowledge. Haven't seen him in a couple of weeks, so I hope all's well with him.

When the new light arrives to replace the one with the faulty clip,  I'll get in touch. But I think I'll bite the bullet and get the plumber for the plumbing issue. It's not complex but it's strenuous,  I don't want to impose.

There's a new arrangement where I can return the old light without wrapping it. I got a code, one of those square things, which I have on my phone, take the light and parts to the UPS store locally, they scan the code, accept the light and pack it with other returns. Then eventually I get a refund. If it works, great.

Now for my Friday salad supper, fresh from the Misfits box, a picture of which I can't load, oh well, you've seen a salad before.

I thought of you yesterday when we picked up a box of veggies from a local organic farm. Not misfits however but great produce which we will enjoy this next week for sure!

It's a little bit ridiculous how much I look forward to your misfits box reveal. I'm having a salad from my garden tonight made of a few pickings and some thinnings. Tiny micro-greens with olive oil, oregano, salt, pepper, garlic, and balsamic vinegar. I think you would love it.

I'm glad you're joining my Friday night salad! And I think it's entirely appropriate for my misfits reveal to be a high point in any life..

I'm so used to seeing pretty much perfect produce, fresh, smelling how it should, tasting excellent, that I forget it's misfits. Often it just means an over stock, no time before the sell by date. But still peak fresh. Sometimes the size is "wrong" for high end groceries. But good to eat.

Me too - salad thoughts! (We can still trot out to the garden for a bit of kale, but that's about it). We may need to try Misfits this winter once our Farmer's Market closes for the season. Do you still have a referral code?

I forgot to note yesterday my appreciation for pointing out the palindrome and introducing me to the word "ambigram". In exchange, I will mention a conversation I recently had with my Mike, as the dogs were trotting in front of us. Torically speaking, they're doughnuts - and so are we! I am completely NOT a math nerd (long story about a teacher who should NOT have been a math teacher), but I love mathematical oddities.

Best of luck with the plumbing and lights. And good on'ya for figuring out that QR code thingy. I have not yet attempted to.

My favorite salad was not available when I got my grocery order so I'm having some salad envy. Enjoy!

COOKWME-Q16BMM is the code to get a discount on your first Misfits box. I've emailed a screenshot, too, Chris. Thank you for thinking of this.

E, so disappointing when you're all ready for a food that doesn't show up. I'm always totally in for a salad after I finish my Misfits prep on delivery days.

Your Misfits box always looks good though the amounts feel a bit intimidating.

It's two weeks supply of produce and longer than that of pantry items. We don't often set out a two plus week supply all at once, so it does look a lot. I buy tea and dairy products in addition, and that's my total food requirement catered.

Wish we could get Misfits boxes here but not at present - maybe one day. I am noticing bags of produce have appeared in grocery stores that are labeled as being 'seconds' so that's a step in the right direction.

I think there's a general move away from uniformly cosmetic appearance and into more natural shapes. Good. Produce isn't machine made.