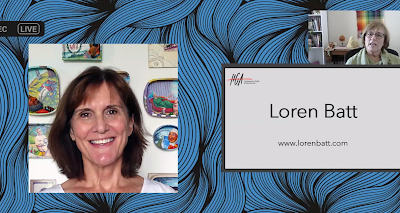 Here she is, on the right,  in her studio with small box pieces on the wall behind her.

She's another of those artists who's traveled all over the world, following her husband's work, so there are the traces of many cultures in her work, which is playful and thoughtful at once.

Originally a painter, she works in soft sculpture, and has taken lately to photographing her figures and photoshopping them into images she prints out.

But she still makes found object boxes of hand stitched figures, one of which was selected for the annual Handweavers guild small works show.

She's also collaborating on a picture book with a writer. I can definitely see her work there.

She commented that what she's making is something  like decorative art, something like craft, but neither really. So finding venues is tricky. Our passion for labeling leaves her in limbo. 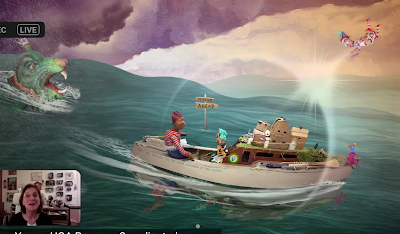 Photoshopped piece with images of earlier sculptures cut into a painted background. 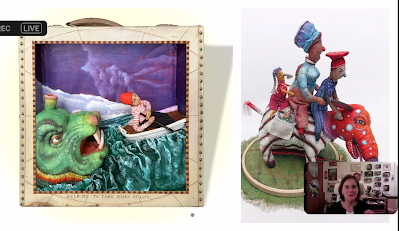 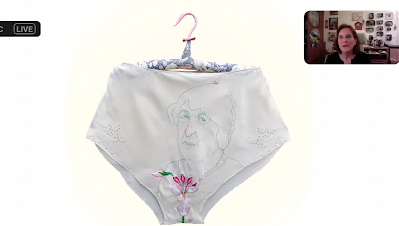 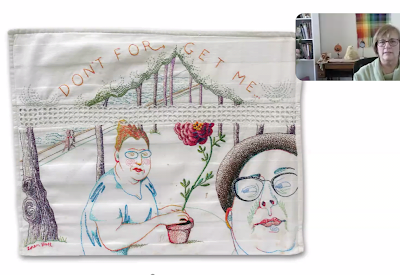 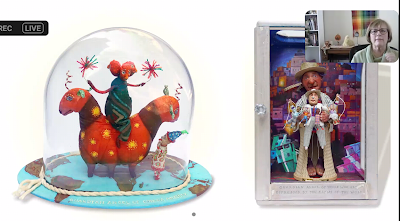 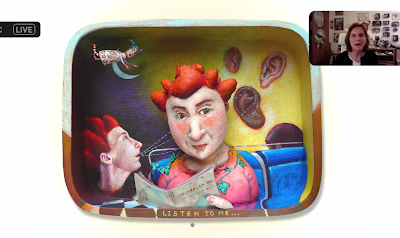 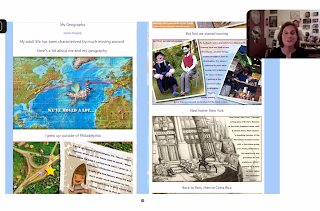 This is her resume. She just couldn't write the usual artist one, had to illustrate it. 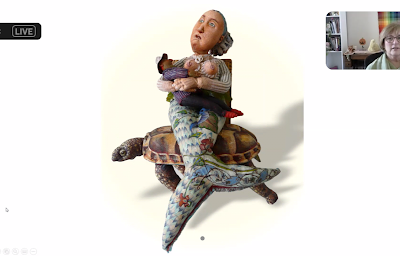 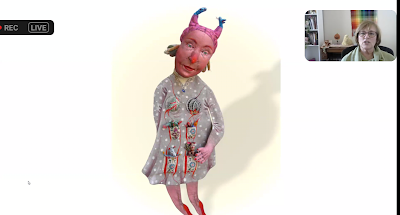 Anyway, here's some of her work. She freely acknowledges she's a beginner in embroidery, being more interested in the hoop as a stand for figures. I noted that!  About using hoops, yes, great idea. She uses embroidery to stitch messages into the work.

In the past she's made full-size figures which have appeared in stores as part of the decor. But the ones you see in these pictures are largely no more than maybe 15" tall.

And she reawakened a literally lifelong plan if mine, to make lifesuze soft sculptures. To wear my clothes. I can construct them using my Sonya Phillips pattern for pants and my own pattern for tops... Magpie was quite right when she said watching this series is enough to send you off in all directions!

This is how I know Loren's good -- it's a sure sign when someone else's art triggers an urge to run and make your own.

I hope you enjoy these images. It was a very fast hour.

Some of the posted questions were interesting, one asking if she was influenced by Joseph Cornell's boxes, and she said she needed to find out who he was! Her art history had missed him. If yours has, too, check him out. Not as playful but powerful.

When she mentioned having more boxes and raw material than she could ever get through, another questioner mentioned her SABLE.

At this it was the host's turn to look baffled, showing she's not a knitter! And had it explained to her: Stash Acquisition Beyond Life Expectancy! She's a weaver and some of the guests outrun her knowiedge of textiles.

Worth going to Lauren's website to see more.  I find more and more that textile people seem approachable and fun.

When I started saori, spontaneous, weaving years ago I thought traditional weavers would disapprove of the homemade looms,  wild colors, any old thing used for the weft, wavy selvedges. But the largely Indian ones who'd seen them were hugely supportive and really kind to my efforts.  So there's that.

Nice to assume the best of each other!

Speaking of which, Gary's over soon to replace my ceiling light and hopefully make my worktop less gloomy. He had a couple of my  blueberry muffins for breakfast to give him energy.

I would love to see a full-sized figure you made.

Interesting work...yes, I did see your comment and tried to explain the process here, much of which is about insurance. Look at rebelpuritan.com for information on Herodias Long and her life and the books by Joanne Butler. You can also Google Herodias Long. She is among my Quaker ancestors.

Thank you for the info. I'll definitely look her up. How wonderful to be able to trace your family so far back.

Handsome Partner's chair was also an insurance issue, except he ended up with pretty much the cheapest Medicare covered chair, for various reasons. Very few non motorized chairs for frail quadriplegic patients, none that recline. None that fitted in my car. Endless logistical issues! Long story. But I feared you'd thought I didn't grasp the significance and possible complications of a chair. Thanks for reassuring me.

oh, fun stuff. thanks for showing us.

A life-size soft sculpture! DO IT!!!

That art is amazing and I too would love to see your life-sized sculpture. We will wait in anticipation.

You have a lot of faith in me!

Re making life-sized soft sculptures - I saw an idea somewhere online to wrap your body in duct tape and then cut it (very carefully!!!) up either the back or the front, re-tape the cut, stuff it... to make a dress mannequin that is your exact size. I would think something similar would work as underpinnings for a life sized sculpture, or at least the basis for one. Just a thought. Or, barring using your own body, if you had access to a mannequin you could do the same process (and not risk doing yourself bodily harm in the process!)
I really enjoyed seeing the art work of Loren Batt - thank you!

That duct tape deal requires two people, one to stand, one to wrap. And it's the torso only, clearly! But I do have an idea on how to draft this out. in fact the preliminaries are under way. Watch this space!

I like those sculptures! and the granny panties are just great!