Today the mystery plant is twice as tall as the last pic you saw, 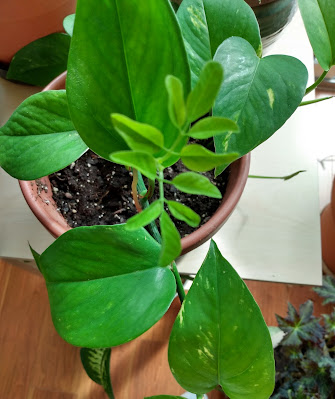 So it may be ash, hickory or black walnut, unless you have a better idea. In any case it will probably be about fifty feet tall when it's done.  Most likely a squirrel donation. All local trees.

And remember the doctor's appointment postponed from September 2 to late December in account of Ida? One hitch is the follow up mammogram to the scare I had in the spring. It's not over yet.

Anyway how to get it done on time.. so I called the doctor's office. No chance of an appointment before January, better stick with December after all. But star nurse Christine said, nah, this is easy, when she got back about fifteen minutes later, a landspeed record, I already faxed over a script, just call them and set it up. Which I did, and they did, for October, bang on schedule. Middle management gets it done.

Breathing happily, I promptly had a good idea. While the sari is waiting its turn to be made into clothes, why not let it hang, to air out and lose the packing creases. In a doorway.

I replaced the tired handweave which will get a turn in the dryer to dedust it. 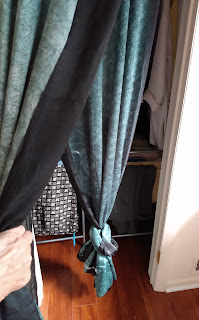 New portiere. And you see how much fabric this is. I knotted it up at the back so the front would just brush the floor.  You can see the drape. Perfect for a skirt, among other things.

I'm going to be that old lady who always wears green silk..so much fabric. Or that woman who cuts up portieres to make dresses, like that woman and the curtains in the movie. 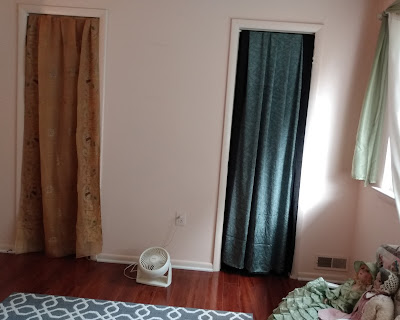 Once again my stuff is multitasking.