My storm-tossed Misfits box arrived, a day late, but safely and in good shape.  So here's the haul this week.  Lovely blueberries because I fancied a little jar of jam.  And an array of apples, red pears, and yellow potatoes plus baking spuds.  Greens of all kinds, carrots to go with the in-house cashews in soup quite soon I think.  Honey.  Broccoli, spinach.  The potatoes might make a good soup with the leeks I still have in the freezer.  I have an endless appetite for soup when I'm too lazy to think up different recipes. 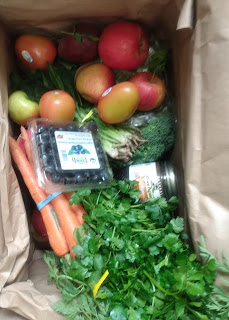 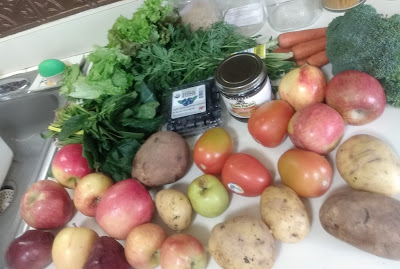 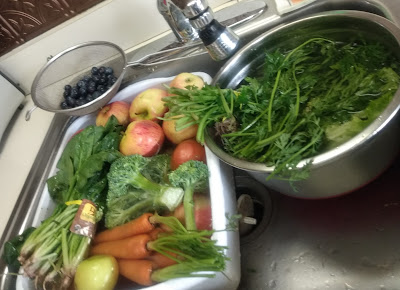 Everyone into the pool, to shed some of the farm grit and dirt.  Half an hour in cold water is good to make lettuce crisp again after traveling. 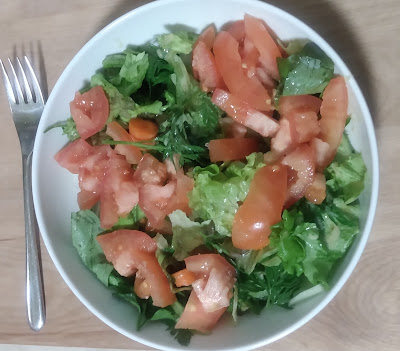 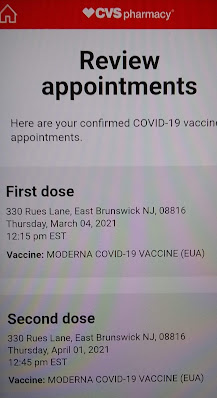 After many hours online and on the telephone, many heartbreaks at being shut out in seconds from supplies, over and over, since early January,  I finished up last night at midnight, then started again this morning at 4 a.m.  Since the state site is useless, the county not responding, the two hospitals now limiting their supplies to seriously compromised people, Walgreen's with no vaccine in this state, Rite Aid with a website and no supplies, I decided that the only hope was CVS.

I checked all the others, then got into the prewaiting room on the CVS site.  Two hours of refreshing and checking there, then I made it into the Waiting Room!  excitement. Half an hour there then I couldn't believe it, the screen changed and I was being offered an appointment.  I knew that they often open the portal at about 6 a.m. but knew from experience that's too late to try.  You have to be in the group long before that, in order not to be shut out.

I knew from their website that this pharmacy was getting supplies, it's not the one near me, about half an hour away, I think, but never mind, they offered me next Thursday, and I chose the time.  The second dose is April Fools' Day, hm, not sure what that means.  But anyway, to prove it they sent a confirmatory text.  So I'm set.  Finally.

My dear next door neighbor says he'll drive me there, since I'm unfamiliar with this location and he knows it well.  I put the text on my home screen in case challenged, since he had an appointment which they would not honor a couple of weeks ago, because they failed to send the confirmation.  Dodgy website. He ended up by the intervention of friends searching, in getting appointments elsewhere, two and a half hours away, one way.  With less than an hour's notice -- it was a cancellation.  So I made sure my confirmation is right there. And all the paperwork has been done online, including electronic signature for consent.  Much better than the county sites which insisted that the consent be downloaded, printed out, signed and brought to the site for the appointment.  As if.  This is a fairly small site, so I get to go into the store and follow the instructions there.  Like my local one, in fact.

So we're good.  All day I've been dropping off to sleep, partly because of being up since 4, partly the sheer emotional relief of finding an appointment after all this work and time. My life won't change dramatically for having the vaccine; everything I used to do is still closed, in-person is not yet a thing for my groups, the shops are  scary.  But it will lift that great fear that has been everywhere around me.  That's huge.  Then I can enjoy being at home, as I used to, because the Big Wide World is less scary.

So I'm turning my energy to helping a friend get her appointments, too, since I'm a bit more adept at the computer thingy.  Her daughter is helping, but she's got to work, and it doesn't hurt to have another pair of hands clicking away and holding and refreshing, and I'd like her to get it.  She's a true friend.  She was genuinely happy for me to have got my appointments, even when she still hasn't.  That's the mark of a friend. It's easy to be nice to someone who's having a hard time.  But it's much more challenging to be happy when your friend gets an opportunity you also very much would like.  I had emailed her as soon as I got my dates this morning, but by the time her daughter accessed it, they were gone.  The entire state's CVS sites were filled in less than five minutes from opening.

A number of my friends, some not yet eligible for some time, have been generous. It's been a good thing to experience.  I'm giving back by helping in my turn.