How we met, another story

Mary Moon recently wrote an account of how she and Mr M met, then another blogger followed suit, very different, equally engrossing story. So I thought self, why don't you go and do likewise?

My story's a bit different, since I didn't even know we'd met. I shared a flat as an undergraduate with a science major, and he, a doctoral student, was her lab boss. This was in the late 1950s. She invited him to one of our crowded, noisy parties, where I greeted everyone but didn't single him out beyond being one of Joan's  friends.

Not surprising, since I was engaged to someone else at the time, and paying more attention there. Years later, Joan told me the man who became Handsome Partner pointed me out in the crowd, asked her my name, and said "I'm going to marry her." She explained I was engaged, and he said quietly "I can wait." Which he did. A determined Scot.

After I ended my engagement, discovering later I'd had a narrow escape, too  boring to go into here, HP started being very evident in my life.

By the time I graduated, both parents had died, and the one sister remaining in England had refused to come to my graduation ceremony, so I would have no-one there to see me graduate. He said I'll pretend to be your Dad, give me a ticket! He was six years older than I, not exactly Dad material. But he spent the whole day with me so I would have someone there.

I was the first person in the history of my working class family to go to the University, and my degree was was in a  competitive program, so, a lot of glass, and class, ceilings busted. Since he was also the first in his own family, he got it.

I was determined not to marry and chuck away all the effort the degree had taken, especially after two ended engagements, yes, there was an earlier one.

That one was busted up by my future mother in law who said no Catholic would be welcome in her family. Lucky escape, since if he had had the nerve to defy her, she'd probably have been unrelenting in her efforts to reclaim him! But the two engagement experiences showed me I'd better not waste more time on relationships, just friendships from now on.

HP quietly went on being a friend, including me in his curry dinners with friends, and proposing to me many times. Finally I thought self, he's meant for you, don't fight it, and I accepted him. By then we'd known reach other about five years. No sense in rushing things.

Then in 1963, marriage then emigration to the US, no jobs available in the early 60s UK for people with advanced degrees. His doctorate in atomic science, my degree in modern languages, making us prime invitees of the US government trying to increase their science and foreign language strengths after Sputnik. He had a choice of five institutions inviting him to do post doc research. Those were the days. I picked up temp work along with modern language teaching projects.

Another immigrant said to me recently we're the only people she knows who were invited to the US!

Then followed a long life, ups and downs, together and apart, until we were inseparable for the last ten years of his life, till 2011.

Here's a  small drawing in sepia ink, of him sleeping, in old age, with CK Duncan the cat on his sleeve, after HP had become paralyzed., 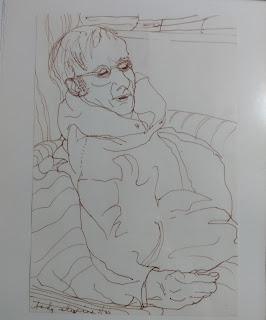 So that's us.  Part comedy, part tragedy, never ever dull.
Yesterday's drawing was a charcoal reduction. I covered the page completely  with charcoal,  then used fingers, kneaded eraser and a tortillon to remove parts and create the image.  Ages since I did one of these. They're very nice done with watercolor, too. You use transparent nonstaining colors that can be lifted with a wet brush. 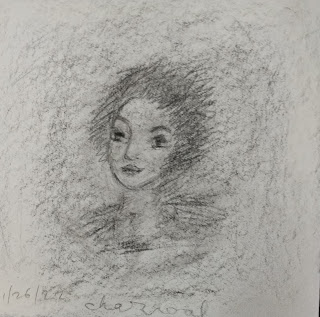 And if at this point, what with sepia and charcoal,  you're longing for color, me, I can do fine without it, here's a bit of color relief 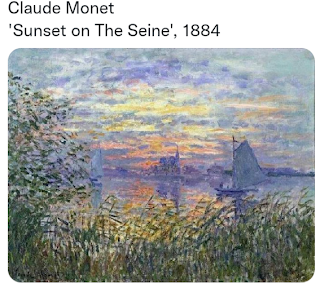 Happy day, everyone, we're all the stars of our own life arc!