White Rabbits, everyone!  And a Happy St David's Day to us all. I scouted outside in case of daffodil spears, not yet.  The daffodil is the national flower of Wales. So I did the nearest I could to leeks, the other symbol of St. David, Patron Saint of Wales, and here's a bag of leeks chopped ready for soup.  I might make a pot of leek and potato soup in honor of the day. 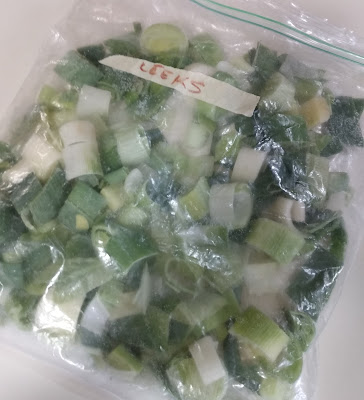 The leek story goes that the Welsh forces, led by St. David, now Dewi Sant, who I guess was then just David, or maybe Dafydd, Dai to his pals, advised his troops, in a battle against the Saxons, this is ancient stuff, to wear a leek in their hats, as a way of distinguishing them from the enemy.

The Welsh won, though history doesn't record if it was the leek effect.  Evidently they didn't use uniforms, probably all the combatants in those homespun rough dress things, looking alike, and no doubt covered in mud, given the climate and the season when leeks are available.

Considering how exciting it is when the first daffodils open, I really think that in this kind of region where winter is a serious season,  they should open their trumpets in spring with a noisy flourish,  and all the other spring bulbs should have musical sounds, too.  It could be a wonderful chorus as you wander about in late March around here. Daffodil  trumpets, flutes for the crocus,  oboes for tulips, drums for the aconites, tympani for the hairy bittercress.  Who do I talk to about this?

Just to show how fraught it is around NJ to get anywhere near a vaccination, when my doctor's office called me this morning with test results, just baseline stuff, I told nurse Christine, and she screamed with excitement!  Loudly congratulated me. Even all the medical group support staff haven't got it yet.  It illustrates what I've been talking about.

And I've been in touch with various helpers, and with unhelpful inquirers, to let them know. The first group to thank them warmly, the second to pacify them.  But the work goes on, now helping two friends track down opportunities to go for.

All's good.  And I now have that book recommendation from Ellen, The Lake etc., on my Kindle, ready for this afternoon's reading delight. I had tried it in audio by the author, but was not happy with his sound, so I'll hear it in my head instead by reading it.